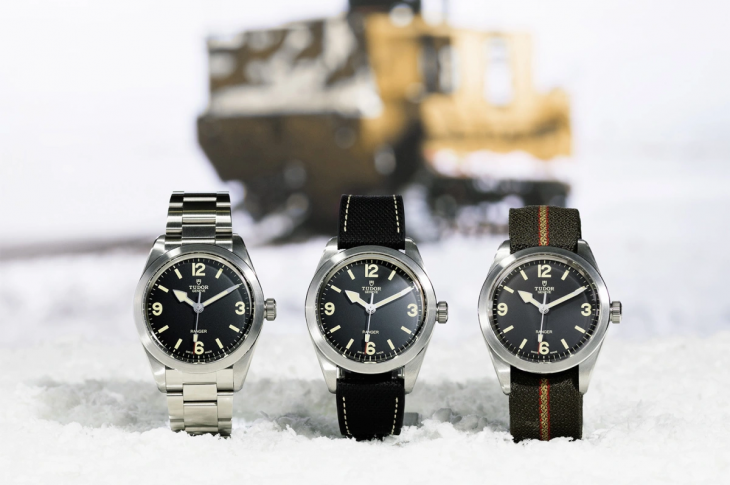 TUDOR Ranger, the Spirit of a tool watch.

IN 2022, TO MARK THE 70TH ANNIVERSARY OF THE BRITISH NORTH GREENLAND EXPEDITION, TUDOR IS PRESENTING THE RANGER MODEL, A TOOL WATCH CELEBRATING THE SPIRIT OF THIS DARING ADVENTURE, COMPLETE WITH MANUFACTURE CALIBRE MT5402, A 39-MILLIMETRE CASE AND A CLASP WITH RAPID ADJUSTMENT SYSTEM.

THE SPIRIT OF A TOOL WATCH

THE NEW RANGER CONTINUES, WITHIN THE TUDOR COLLECTION, THE TRADITION OF THE EXPEDITION WATCH, BORN WITH THE OYSTER PRINCE WATCHES USED BY THE MEMBERS OF THE BRITISH NORTH GREENLAND EXPEDITION. THE TRADITION OF A ROBUST, PRACTICAL, AND AFFORDABLE INSTRUMENT.

The new Ranger model respects the aesthetic standards established in the course of its history, especially its dial with Arabic numerals at 3, 6, 9 and 12 o’clock. Vintage watches enthusiats will appreciate the hour markers painted in luminescent material. Beige in colour, they perfectly contrast with the grained, matt black dial and match the tone of the TUDOR shield logo and inscriptions. Also characteristic of Ranger aesthetics is the arrow-shaped hour hand.

To echo its functional heritage, the 39-millimetre case and the bracelet of the Ranger are satin-brushed, creating an overall matt finish, in the purest spirit of a “tool watch”. Some elements, however, are polished to strengthen the lines of the case, including the inner edge of the bezel.

An attentive eye will notice the return of a detail of historic importance, the Ranger mention at 6 o’clock on the dial. That and the tip of the angular seconds hand in burgundy, bring a novel touch to the characteristic Ranger aesthetics.

The fabric strap is one of the hallmarks of TUDOR, who, in 2010, became one of the first watchmaking brands to offer it with its products. Woven using a traditional method on 19th-century Jacquard looms by the Julien Faure company in the St-Étienne region of France, its manufacturing quality and comfort on the wrist are unique. In 2020, TUDOR celebrated ten years of collaboration with the hundred-and-fifty-year-old Julien Faure company. The partnership began with the launch of the Heritage Chrono, the first model fitted with a fabric strap created by the craftsmen, at Baselworld 2010. For the Ranger model, TUDOR chose an olive-green bracelet with two red stripes and one beige stripe woven by the craftsmen. Finally, a third bracelet option is offered, in natural rubber and fabric-like textured black leather, with beige topstitching and a folding clasp.

The Ranger is also offered with an entirely satin-brushed steel bracelet, with the TUDOR “T-fit” clasp equipped with a system for rapid length adjustment. Easy to use, requiring no tools and offering five positions, this practical system allows wearers of the TUDOR Ranger to carry out a fine, instant adjustment of the total length of the bracelet along an adjustment window of 8 mm.